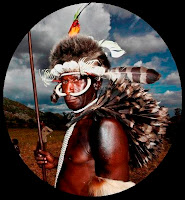 Lorentz National Park is located in the Indonesian province of Papua, formerly known as Irian Jaya (Western New Guinea), with an area of 2.450.000 hectares, it is the largest national park in South-east Asia. In 1999 Lorentz National Park was declared a 'World Heritage Site' by UNESCO.

An outstanding example of the biodiversity of New Guinea, Lorentz is one of the most ecologically diverse national parks in the world. It is the only nature reserve in the Asia Pacific region to contain a full altitudinal array of ecosystems ranging through marine areas, mangroves, tidal and freshwater swamp forest, lowland and montane rainforest, alpine tundra, andequatorial glaciers. At 4.884 meters, Puncak Jaya (formerly Carstensz Pyramid) is the tallest mountain between the Himalayas and the Andes.

Located at the meeting point of two colliding continental plates, the area has a complex geology with on-going mountain formation as well as major sculpting by glaciation and shoreline accretion which has formed much of the lowland areas. These processes have led to a high level of endemism and the same area supports the highest level of biodiversity in the region. The area also contains fossil sites that record the evolution of live on New Guinea.

As well as very high biological diversity, the park also has other unique features such as the glaciers on Puncak Jaya and a river that disappears under the ground for several kilometres in the Baliem Valley (Lembah Baliem).

Lorentz National Park is named for Hendrikus Albertus Lorentz, a Dutch explorer who passed through the area on his 1909 - 1910 expedition. 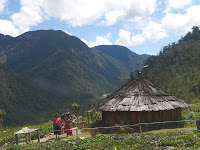 Among the species of plant that grow in this park are Nipah (Nypa fruticans), Bakau (Rhizophora apiculata), Pandanus julianetii, Colocasia esculenta, Podocarpus pilgerii, and Nauclea coadunata. 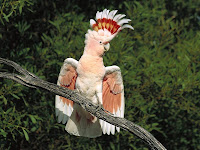 There are about 630 species of birds (some 70 % of the total number of bird species in Papua), 123 species of mammals, and various other animal species. Some of the more interesting species of bird are two species of 'Cassowary'. 31 Dove and Pigeon species, 31 species of Cockatoo, 13 species of Kingfisher, 29 species of Sunbird, and 20 endemic species that are found nowhere else in the world, including the Snow Quail (Anurophasis monorthonyx) and the Long-tailed bird of Paradise (Paradigalla caruneulata). The mammal species include the Long-beaked Echidna (Zaglossus buijnii bruijnii), Short-beaked Echidna (Tachiglossus aculeatus), and four species of Cuscus as well as Wallabies, Forest Cats and Tree Kangaroos.

The park's high biological diversity is matched by its marvellous cultural diversity. It is estimated that the some of these cultures have existed in this area for more than 30.000 years. This is the home of tribes such as the Nduga, Dani Barat, Amungme, Sempan, and Asmat. It is quite possible that ther are still other communities living in very isolated areas who have never had contact with the modern world at all. 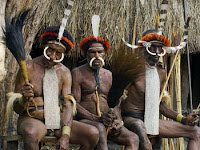 The Asmat are well known for their skill at chiselling wood into fine statues. According to their belief, the tribe is identical to the forest or trees. The trunk of a tree symbolizes the body of human being; the branches are the arms, and the fruit symbolizes the human head. Their ancestors-spirits, they believe, dwell in the trees. As such, the Asmat accord great respect to trees. River, mountain and other natural features are similarly honoured.

Lorentz National Park stretches for over 150 km, from Papua's central cordillera mountains in the north to the Arafura sea in the south. The park can be divided into two very distinct zones : the swampy lowlands and the high mountain area of the central cordillera. The central cordillera it self can be subdivided in the easthern part and the western part on the basis of geology and vegetation types.

The central mountain ranges are the southern portion of two colliding continental plates, which are causing the mountain range to rise. The lowering and rising of the sea level during the glacial and interglacial periods of the Pleistocene epoch, along with continuous activity in the mobile belt which characterizes the contact zone of the two colliding lithosperic plates, has continued to promote the great biodiversity of the island of New Guinea in general, and in the Lorentz area in particular. Large tracts of the mountain range and especially the area formed by the traditional lands of the Amungme (or Amung) are rich in mineral deposits, especially gold and copper.

The Carstensz/Puncak Jaya section of the Jayawijaya mountain range still retains small ice caps. It is one of only three equatorial sufficiently high altitude to retain permanent ice. The main snowfields comprise five separate areas of ice on the outer margins of Mount Puncak Jaya. These include two small fields which feed the Meren and Carstensz glaciers and a small hanging glacier on the Carstensz Pyramid.

Declared by Minister of Forestry No. 154/Kpts-II/1997. March 19, 1997.
Email ThisBlogThis!Share to TwitterShare to FacebookShare to Pinterest
Older Posts Home
Subscribe to: Posts (Atom)